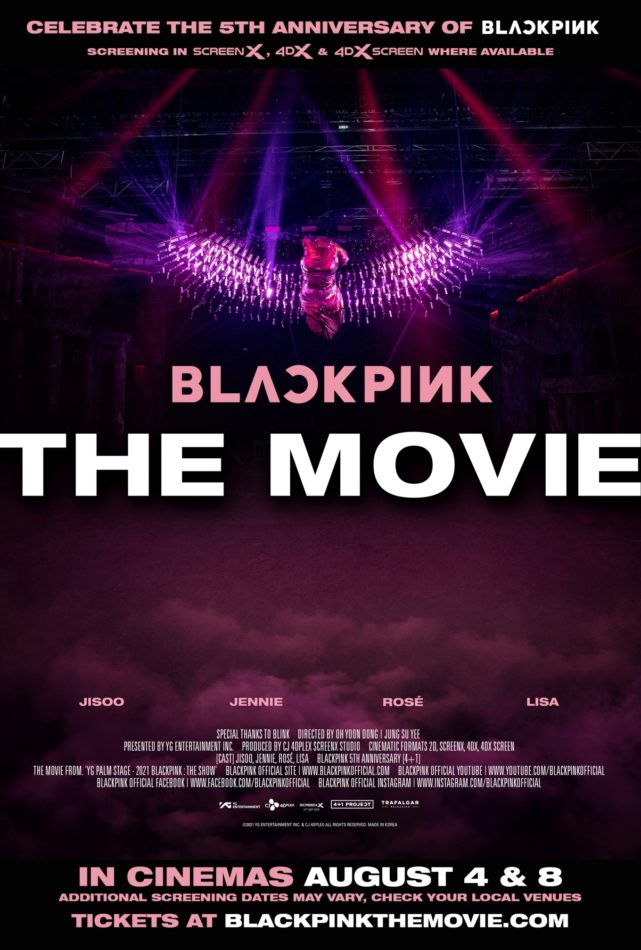 August 17 2021: CJ 4DPLEX and Trafalgar Releasing today announced that BLACKPINK THE MOVIE has become the highest grossing event cinema release of 2021, with a total gross of $4.8m from just under 100 territories.

Delivering the highest-ever number of admissions for an event cinema release in 2021, BLACKPINK THE MOVIE saw 500,000 admits around the world as fans of the band, known as BLINKs, flocked to cinemas to experience the film on the big screen. The film was released as part of BLACKPINK’s 5th anniversary celebrations, and was available in special formats ScreenX, 4DX and 4DX Screen.

Starting on August 4, BLACKPINK THE MOVIE has been seen in over 3,400 movie theaters, on a limited engagement gaining a global box office of circa $4.8m, the highest gross for an event cinema release this year. Further release dates are expected across Asia as local restrictions are lifted.

BLACKPINK THE MOVIE reached No. 6 at the US box office on the August 4 opening night and delivered the second highest per screen average for a release on 100+ screens, bested only by Disney’s JUNGLE CRUISE.

The film also took the number one spot in Mexico on August 4, with cumulative total admissions now exceeding 120,000.

Further highlights included taking the number three spot across the weekend in Turkey, behind THE SUICIDE SQUAD and FAST & FURIOUS 9, and emerging market Saudi Arabia yielding 15,000 admissions and a total gross of $250,000.