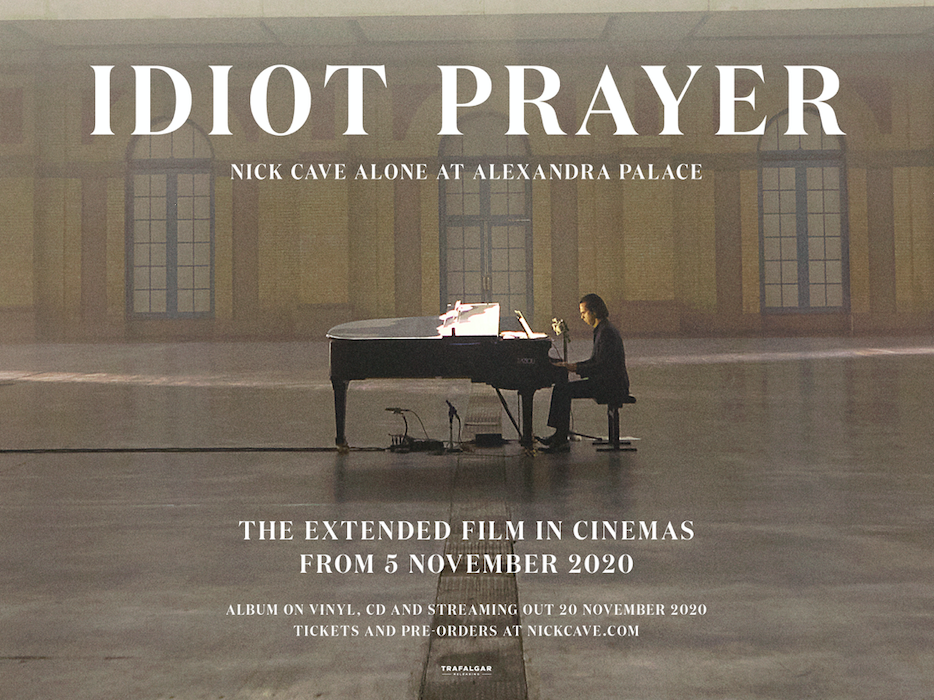 Following the extraordinary response to the online streaming event in July, audiences will have another chance to experience Idiot Prayer – Nick Cave Alone at Alexandra Palace as it screens in cinemas globally via Trafalgar Releasing from 5 November. The cinematic release of this remarkable and compelling film will be followed by an album on 20 November, available on vinyl, CD and streaming services worldwide.

Idiot Prayer – Nick Cave Alone at Alexandra Palace was recorded in June 2020 as the UK slowly emerged from lockdown, and was conceived as a reaction to the confinement and isolation of the preceding months. Initially imagined as an online only event, fans will now be able to see the film in cinemas as an extended cut featuring four unseen performances.

Two weeks later on 20 November, the music will be released as a double album of the same name featuring all 22 songs from the original film on vinyl, CD and streaming.

In Idiot Prayer, Cave plays his songs alone at the piano in a rarely seen stripped back form, from early Bad Seeds and Grinderman, right through to the most recent Nick Cave & the Bad Seeds album, Ghosteen.

“The film ‘Idiot Prayer’ evolved from my ‘Conversations With…’ events. I loved playing deconstructed versions of my songs at these shows, distilling them to their essential forms. I felt I was rediscovering the songs all over again, and started to think about going into a studio and recording these reimagined versions at some stage – whenever I could find the time.

Then, the pandemic came – the world went into lockdown, and fell into an eerie, self-reflective silence. It was within this silence that I began to think about the idea of not only recording the songs, but also filming them.

We worked with the team at Alexandra Palace – a venue I have played and love – on securing a date to film just as soon as they were allowed to re-open the building to us.

On 19th June 2020, surrounded by Covid officers with tape measures and thermometers, masked-up gaffers and camera operators, nervous looking technicians and buckets of hand gel, we created something very strange and very beautiful that spoke into this uncertain time, but was in no way bowed by it.

This is the album taken from that film. It is a prayer into the void – alone at Alexandra Palace – a souvenir from a strange and precarious moment in history. I hope you enjoy it.”