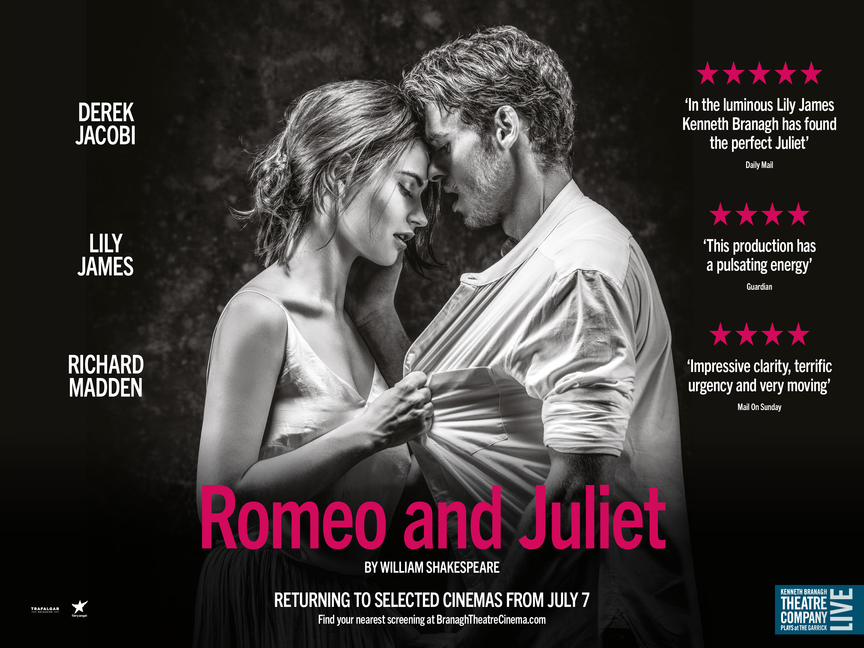 London, UK, 20 May 2021: Trafalgar Releasing, in collaboration with Fiery Angel, are pleased to announce the return of the Kenneth Branagh Theatre Company’s modern and passionate production of Shakespeare’s Romeo and Juliet to cinemas across the UK and internationally from July 7, 2021.

Staged in the West End in 2016 as part of the inaugural Plays at the Garrick season, this inventive and atmospheric reimagining of one of Shakespeare’s best-known tragedies was co-directed by Sir Kenneth Branagh and Rob Ashford with a stellar cast featuring Richard Madden as Romeo, Lily James as Juliet, Sir Derek Jacobi as Mercutio and Meera Syal as The Nurse.

Romeo and Juliet was the second cinema broadcast in the hugely successful Kenneth Branagh Theatre Company Live cinema season, following on from two-time box office hit The Winter’s Tale. Directed for the screen by Benjamin Caron (The Crown, Wallander, Sherlock), it was filmed in black and white CinemaScope, bringing a new vision to this heartbreaking tale of forbidden love where the longstanding feud between Verona’s Montague and Capulet families brings about devastating consequences for two young lovers caught in the conflict.

‘I am delighted our production of Romeo and Juliet is to return to cinemas this summer. When we staged the play as part of our Plays at the Garrick season a key aim was to attract new audiences, both by presenting Shakespeare with naturalism and reality, but also by taking the play out to the wider world through our partnership with Trafalgar Releasing. The original cinema broadcast was seen by 125,000 people worldwide and I hope that this rerelease will give many more people ­– particularly schoolchildren and students who have endured such a major interruption to their education during the past year – the opportunity to enjoy this passionately committed production of Shakespeare’s timeless tragedy.’

Marc Allenby, CEO of Trafalgar Releasing added: ‘It’s been five years since we first broadcast this cinematic and powerful production of Romeo and Juliet live from the Garrick Theatre. As the world opens up after the global pandemic our cinema partners are looking for fantastic events like this to entice audiences back and once again enjoy the unique experience of the big screen.’

Romeo and Juliet from the Kenneth Branagh Theatre Company returns to selected cinemas from July 7. Tickets are on sale from June 9 at BranaghTheatreCinema.com, where audiences will find current information regarding participating cinemas.