MGC today announces that Trafalgar Releasing will present the company’s critically acclaimed production of John Logan’s Red with Alfred Molina and Alfred Enoch in selected cinemas across the UK and North America on 7 November 2018. Tickets will go on sale from 15 August. 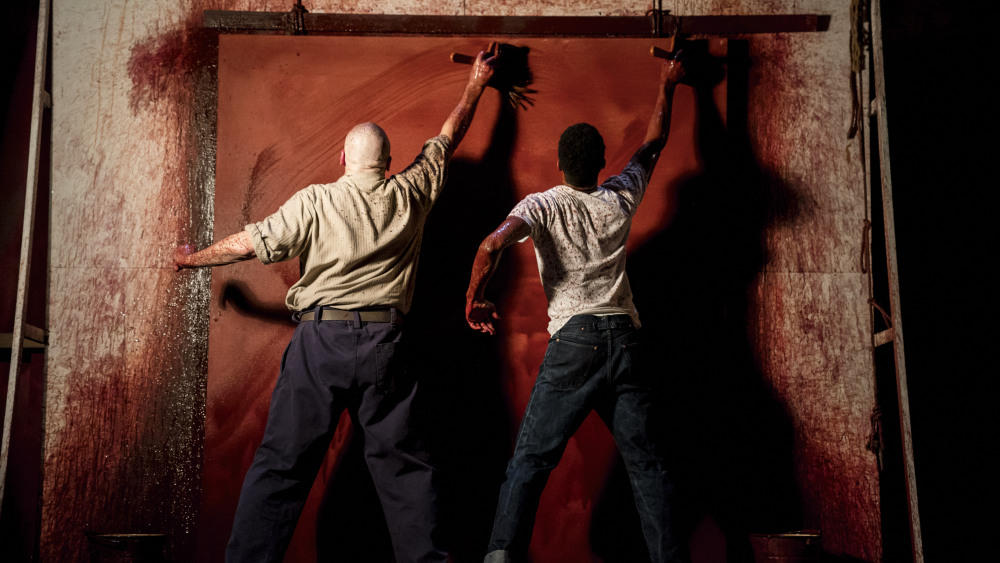 Filmed at the Wyndham’s Theatre, where it completes its run on 28 July, the production is based on Grandage’s original 2009 Donmar Warehouse production, that went on to win six Tony Awards including for Best Play and Best Direction of a Play.

I am delighted that the original production of Red will be screened worldwide for all to see as part of MGC’s commitment to reach as wide an audience as possible. It has enjoyed a long life that has included the Donmar, Broadway, LA and finally the West End, so it is particularly wonderful that it will be broadcast in cinemas later this year with Alfred Molina and Alfred Enoch on stage at the Wyndham’s Theatre.

To me the release of the original production of Red in cinemas feels like a natural conclusion to a run that began a decade ago in London. I’m thrilled that a wider audience will get to share in the work of these two extraordinary actors – especially the towering presence of Alfred Molina, who began this journey with Michael Grandage and me so long ago. Working on Red has always been a joy and privilege, and I’m thrilled to have this consummate production of my play preserved on film.

The richness of Red is illustrated by the fantastic acclaim from press and audiences alike and we cannot wait to bring this outstanding production starring Alfred Molina and Alfred Enoch to cinemas across the UK and USA. We are excited to collaborate with Michael Grandage and the team at MGC for the release of one of the most important theatre events of the decade.

Under the watchful gaze of his young assistant, and the threatening presence of a new generation of artists, Mark Rothko takes on his greatest challenge yet: to create a definitive work for an extraordinary setting.

Red reunites John Logan and Michael Grandage following Peter and Alice with Judi Dench and Ben Whishaw which formed part of MGC’s inaugural season in the West End in 2013, and their feature film Genius.

John Logan is a playwright and screenwriter. His numerous plays include Peter and Alice, Never the Sinner, Hauptmann, Speaking in Tongues, Scorched Earth and Riverview. His adaptation of The Master Builder was in the West End in 2003. He has written the book for the stage adaptation of Moulin Rouge! which is currently running at Boston’s Emerson Colonial Theatre. For television, his work includes Penny Dreadful. As a three-time Academy Award nominated screenwriter, his work includes Alien Covenant, Spectre, Genius, Noah, Lincoln, Skyfall, Hugo, Rango, Coriolanus, Sweeney Todd: The Demon Barber of Fleet Street (Golden Globe Award), The Aviator, Gladiator, The Last Samurai, Any Given Sunday and RKO 281 (WGA Award).

Alfred Enoch plays Ken. For theatre his work includes King Lear (Royal Exchange Manchester), Coriolanus (Donmar Warehouse), Timon of Athens, Antigone (National Theatre). For television, his credits include Troy, How To Get Away with Murder, Sherlock and Broadchurch; and for film, Enoch played Dean Thomas across seven of the eight Harry Potter films.

Alfred Molina plays Mark Rothko. His most recent theatre work includes A Long Day’s Journey into Night (Geffen Playhouse) and No More Shall We Part (Williamstown Theatre Festival). He first starred in Red at the Donmar Warehouse in 2009, which later transferred to Broadway and for which he received a Tony Award nomination for Best Leading Actor in a Play. His other theatre work includes Fiddler on The Roof (Minskoff Theatre – Tony Award nomination), Art (Royale Theatre – Tony Award nomination), Molly Sweeney (Roundabout Theater – Outer Circle Critics’ Award for Most Outstanding Debut Performance), The Cherry Orchard (Mark Taper Forum), The Night of Iguana, Speed the Plow (National Theatre), Serious Money (Royal Court Theatre), Can’t Pay? Won’t Pay! (Criterion Theatre), Oklahoma! (Palace Theatre) and The Taming of the Shrew (RSC). For television, his work includes I’m Dying Up Here, Angie Tribeca, Bette and Joan (Emmy nomination for Outstanding Supporting Actor), Close to the Enemy, Sister Cities, Whiskey Tango Foxtrot, The Normal Heart (Emmy nominated for Outstanding Supporting Actor), Show Me a Hero, Monday Mornings, Roger and Val Have Just Got In, Law and Order: LA and The Life and Times of Tim; and for film, Love is Strange, The Pink Panther 2, An Education, The Lodger, Spider-Man 2, The Da Vinci Code, Silk, Frida, Chocolat, Magnolia, As You Like It, The Hoax, Anna Karenina, Boogie Nights, Species, Maverick, The Perez Family, Hideaway and Raiders of the Lost Ark.

For more information or to find a cinema screening Red please visit: www.redincinemas.com