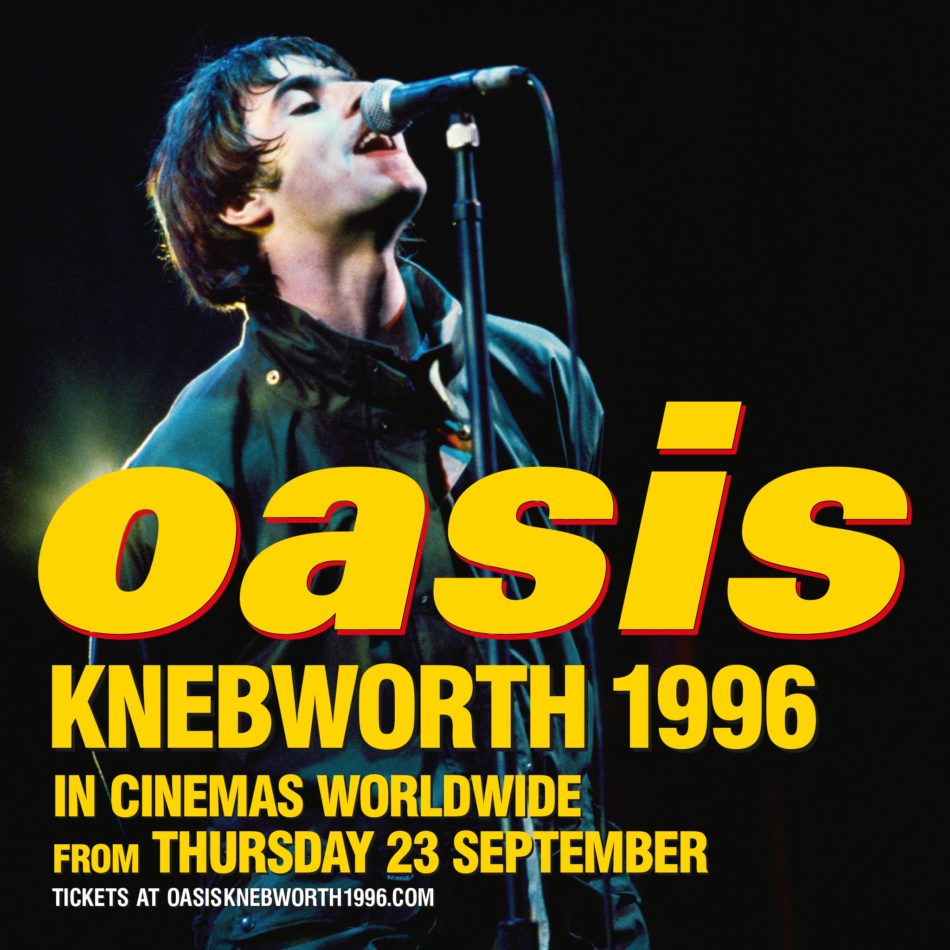 ‘A portal back to a golden age – The Gallaghers’ high-water mark is remembered in thrilling, pint-throwing fashion’ 5 Stars – NME

‘The sheer joy of the concerts comes bursting off the screen’

‘Oasis Knebworth 1996’ has become the highest-grossing documentary of the year at the UK box office, grossing a total of £634,728 to date. Driven by huge excitement and anticipation from fans who were at the era-defining 1996 shows – and a new generation who wish they had been – the cinematic documentary opened at Number 1 on its night of release, also becoming the UK’s highest-grossing event cinema release of 2021.

The film screened across 2,100 cinemas in 61 countries over the weekend, giving fans a much-needed dose of nostalgia as live music returns to our lives.

A raft of critical acclaim cemented the film’s must-see status far beyond the band’s core fanbase. The Telegraph called it ‘a film to restore your faith in the unifying power of rock and roll’ in their 4* review whilst The Guardian’s 4* review read ‘Unchecked euphoria of fans and Gallagher brothers alike is captured perfectly by this ‘90s nostalgia fest’. Clash Magazine wrote: ‘True folk music, Knebworth is the point Oasis came to belong to the people – a beautiful, almost inexpressive moment, it’s ably brought to life in this excellent, rousing, and at times revelatory documentary.’

Directed by Grammy Award-nominee Jake Scott, ‘Oasis Knebworth 1996’ celebrates the story of the special relationship between Oasis and their fans that made the largest concert of the ‘90’s possible. It is a story told entirely in the moment through the eyes of the fans who were there, built around extensive and never before seen archive concert and backstage footage from the event, with additional interviews with the band and concert organisers.

Oasis’ two record breaking nights at Knebworth took place on the 10th and 11th August 1996, with over a quarter of a million young music fans from all over the world converging on Knebworth Park, Hertfordshire.  Featuring a setlist absolutely packed with stone cold classics, these concerts were both the pinnacle of the band’s success and the landmark gathering for a generation.

Tom Mackay, President, Premium Content, Sony Music Entertainment said, “We are thrilled to see that fans around the world have enjoyed the incredible cinematic experience of Oasis Knebworth 1996 and we look forward to providing audiences with even more opportunities to relive the energy and excitement around these iconic concerts soon.”

Trafalgar Releasing’s Marc Allenby says: “It’s fantastic to see the continued recovery for cinema. The success of Oasis Knebworth 1996 demonstrates the widespread enthusiasm from audiences to experience films and events on the big screen and is testament to the iconic gigs the band played 25 years ago.”

The special live album, also titled ‘Oasis Knebworth 1996’, will be released on formats including 2CD and triple LP on heavyweight vinyl with the digital version of the album featuring HD audio. The DVD will be available as a triple disc set including the cinematic documentary plus both nights of the live concert in full, edited by Dick Carruthers with audio mixed by Will Shapland in Dolby 5.1 surround sound, with the Blu-ray in single disc format. Limited edition formats include the 2CD with DVD of the cinematic documentary, plus a Super Deluxe Box Set including the triple LP, 2CD and triple DVD plus replicas of the original gig memorabilia, available exclusively from the band’s online store. All formats are available for pre-order here.

The film is produced by Black Dog Films for Kosmic Kyte Ltd. Noel Gallagher and Liam Gallagher serve as executive producers. It is financed and distributed by Sony Music Entertainment and released theatrically by Trafalgar Releasing.