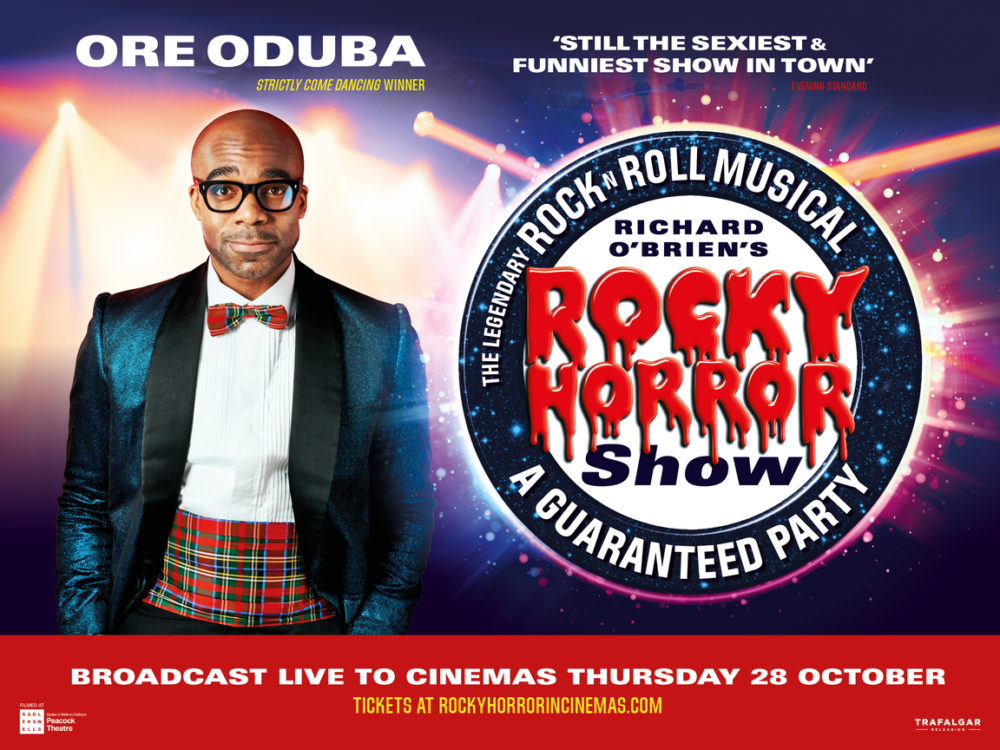 TICKETS ON SALE NOW FROM

Ready to thrill you with fun and naughty moments, Richard O’Brien’s legendary rock ‘n’ roll musical, The Rocky Horror Show, is coming to a big screen near you later this month. This special Halloween performance will be broadcast live from the Sadler’s Wells Peacock Theatre in London’s West End on Thursday 28 October to over 500 hundred cinemas across the UK and Europe. Tickets are on sale now from rockyhorrorincinemas.com

Starring Strictly Come Dancing winner Ore Oduba as Brad, the screening live from the Peacock Theatre is part of the UK Tour that continues to break records in theatres across the country which runs until June 2022. The Rocky Horror Show is a guaranteed party featuring timeless classics, including Sweet Transvestite, Dammit Janet, and of course, the pelvic-thrusting, show-stopping Time Warp.

With the announcement of October’s cinema broadcast, even more theatre lovers across the UK will have the opportunity to watch this “colourful, in your face, relentlessly energetic” (The Times) musical that continues to stand the test of time and fill theatres across the country.

Joining Ore in the cast of the Rocky Horror Show as Frank is Stephen Webb (Jersey Boys / Legally Blonde), alongside Philip Franks (The Darling Buds of May) as The Narrator. They will be joined by fan favourite Haley Flaherty (Mamma Mia / Chicago) as Janet. Kristian Lavercombe (Jersey Boys / Jesus Christ Superstar) once again reprises his role as Riff Raff, following more than 1800 performances around the world, with Lauren Ingram (Beauty and the Beast / My Fair Lady) as Columbia. Ben Westhead (Oliver / The Sound of Music) as Rocky, with Joe Allen (Little Shop of Horrors / Charlie & The Chocolate Factory) as Eddie & Dr Scott.

The Rocky Horror Show is the story of two squeaky clean college kids – Brad and his fiancée Janet. When by a twist of fate, their car breaks down outside a creepy mansion whilst on their way to visit their former college professor, they meet the charismatic Dr Frank’n’Furter. It is an adventure they’ll never forget, filled with fun, frolics, frocks, and frivolity.

The Rocky Horror Show first began life in 1973 before an audience of just 63 people in the Royal Court’s Theatre Upstairs. It was an immediate success and transferred to the Chelsea Classic Cinema, before going on to run at the Kings Road Theatre, 1973-79 and the Comedy Theatre in the West End, 1979-80. Since then, it has become the world’s favourite Rock ‘N’ Roll musical, having been performed worldwide for over 48 years in more than 30 countries and translated into 20 languages.

Ore Oduba says: “I am thrilled to be part of the Halloween live cinema screening of the Rocky Horror Show. It’s been a wild ride so far on tour, the audiences have been incredible.  So we can’t wait to share the fun, frolics and frivolity with cinema audiences all over the UK – for one night only!”

Trafalgar Releasing CEO Marc Allenby says: “We’re excited to bring The Rocky Horror Show back to cinemas for this special Halloween broadcast, working with our partners within the Trafalgar Entertainment Group. As audiences return to cinemas on a major scale, this fan favourite provides an opportunity for a guaranteed fun-filled night out, packed with classic songs and humour”.

The Rocky Horror Show tour is produced by

WHAT THE PRESS HAVE SAID ABOUT THE ROCKY HORROR SHOW

“Still the sexiest and funniest show in town”

“Hard to think of another musical quite as unique as this. Christopher Luscombe’s

affectionate production feels like a genuine blast from the past”

“As delightfully naughty as ever!”