THE DOORS: LIVE AT THE BOWL ’68 SPECIAL EDITION COMING TO MOVIE THEATERS WORLDWIDE ON NOVEMBER 4, 2021 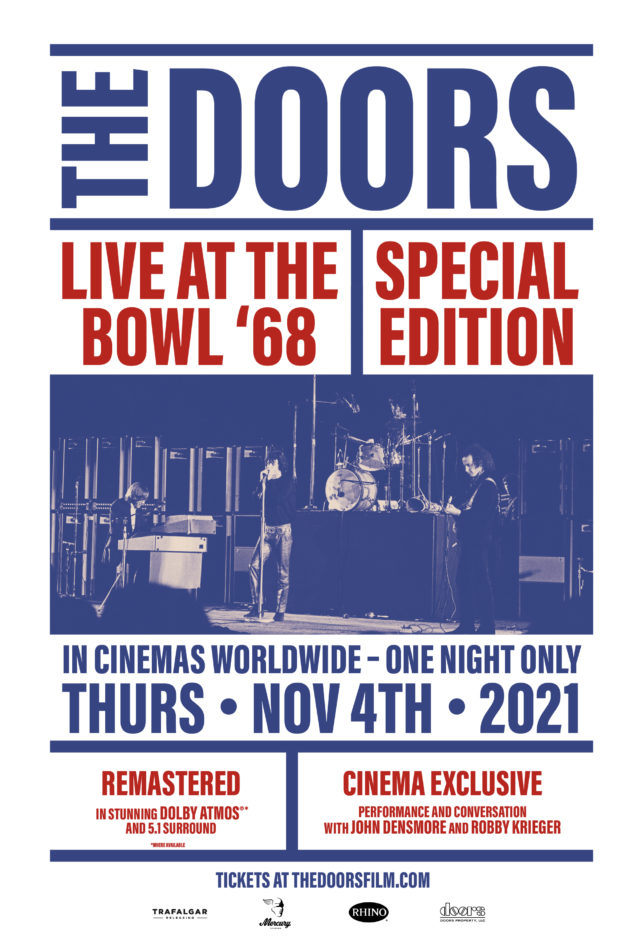 Los Angeles – (September 14, 2021) – Trafalgar Releasing is proud to announce that on November 4th, in celebration of 50 years of The Doors’ legendary album L.A. WOMAN, “The Doors: Live At The Bowl ’68 Special Edition” will transform movie theaters worldwide into concert venues giving fans the closest experience to being there live alongside Jim Morrison, John Densmore, Robby Krieger, and Ray Manzarek. In addition to viewing the full concert film, this special event includes extras filmed exclusively for the big screen: a brand-new musical performance of Densmore and Krieger with special guests, plus a conversation with Densmore, Krieger, and the band’s manager, Jeff Jampol.

On July 5, 1968, The Doors lit up the storied stage of the Hollywood Bowl with a legendary performance that is widely considered to be the band’s finest captured on film. Performing on the back of their third album release, Waiting For The Sun, and the U.S. No. 1 single, “Hello, I Love You,” the quartet had been honing their live performances over the previous two years and were in absolute peak form.

This theatrical “Special Edition” release creates an in-cinema experience for fans like no other. The film has been remastered in stunning Dolby ATMOS® (where available) and 5.1 surround sound by Bruce Botnick, the original engineer and mixer for The Doors, who recorded the live performance at the Hollywood Bowl in 1968 and co-produced L.A. WOMAN. “The Doors: Live At The Bowl ’68 Special Edition” features the concert in its entirety, including “Hello, I Love You,” “The WASP (Texas Radio and the Big Beat),” “Light My Fire,” “The End,” and more. Krieger stated, “The magic that has been done to enhance the picture and sound quality of this show will make everyone feel as though they have a front-row seat at the Hollywood Bowl.”

“We are thrilled to bring fans of The Doors together in cinemas worldwide to share in a much-needed concert experience,” said Kymberli Frueh, SVP of Programming and Content Acquisitions at Trafalgar Releasing. “The 50-year celebration of L.A. WOMAN was a perfect opportunity to capture a brand-new performance with current band members, reminisce on that era, and share memories from the legendary concert.”

The event will be screened in cinemas around the world for one night only on November 4, 2021. Public tickets are on sale beginning on September 21 at TheDoorsFilm.com where fans can find the most up-to-date information regarding participating theaters and sign up for event alerts.

Rhino will also be celebrating The Doors this fall with the release of L.A. WOMAN (50th Anniversary Deluxe Edition) on December 3. The 3-CD/1-LP set expands the band’s legendary sixth and last studio album with more than two hours of newly remixed audio, taken from the original multitrack session tapes, by L.A. WOMAN album producer & engineer Bruce Botnick. Fans can get a sneak preview of the unheard content with the recently discovered original demo of “Riders On The Storm,” recorded at the famed Sunset Sound Recording Studios, which can be heard HERE.